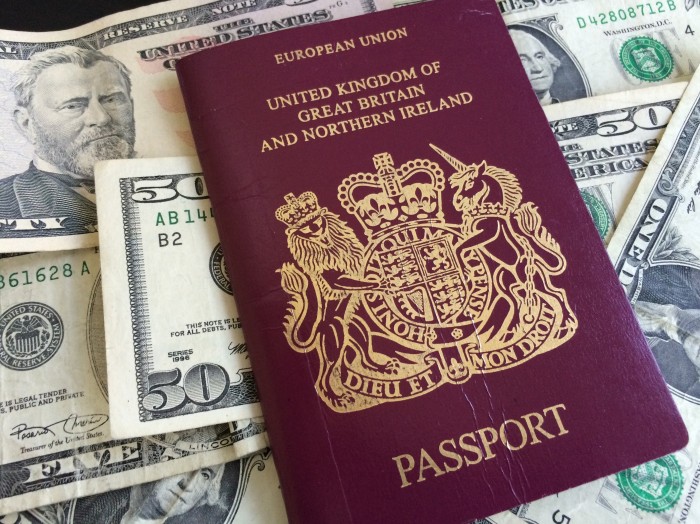 “No, I’m not making it up. I know it sounds incredible, but that really did happen.”

Over the years, these words have become a standard conclusion to any story related to my experiences in mid-nineties Moscow. The words are usually greeted by intensely skeptical, almost sympathetic expressions on the face of the listener – as if they are thinking that the passing years and each telling has caused me to add yet another exaggerated twist to an already unbelievable tale.

The stories from my three years in the Russian capital seem scarcely plausible today. Yet they require no embellishment. This was Moscow a few short years after the fall of communism and – perhaps more significantly – during the dizzying rise of capitalism. It was a city where fiction struggled to compete with bizarre reality. It was a different time. It was a different place. 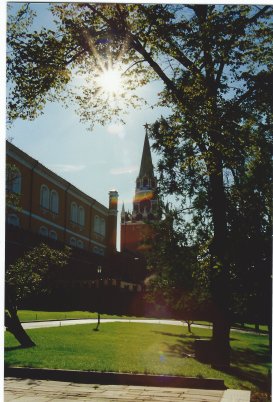 Outside the Kremlin walls in the spring sunshine

It was April 1998. Springtime in Moscow was always my favorite time of year, although I always thought it was a shame that it only lasts for about a week. Sandwiched between the biting cold and depressing darkness of a seemingly endless winter and the oppressive, clammy, dirty heat of summer, the season (such as it was) breathed fresh life into the city.

On the fateful Saturday, I had driven from our apartment near Park Kultury (Gorky Park) into the center of the city. Turning off of Tverskaya Ulitsa near the Pushkinskaya metro station and slowing down to find a place to park, I failed to notice a razor-sharp manhole cover. On contact, the front passenger-side tire of my car exploded.

I brought the car to a hobbling stop at the side of the road and, cursing my luck, retrieved the spare tire and set to work.

The spring thaw. Cathedral of Christ the Saviour in the distance.

While I was busily engaged at the front of the car, I was unaware that someone had opened the rear door on the other side and relieved me of the sports bag that I’d left lying on the seat. It was only when a helpful passerby alerted me to the event that I looked up. The thief – and my bag – was long gone.

I didn’t care about the sports gear, but the bag also contained every important document I had. My passport, visa, driver’s license, car registration, and permit for a mobile phone (yes, you did need one then) were all in that bag.

Gradually, the gravity of the situation dawned on me. I had lost all of the documents that identified me and proved I was legally allowed to be – and drive – in the country. And I still had to get my car back home.

In retrospect, I know it sounds naïve to have kept all of those documents in one place. In my defense, the random “documenti” search of foreigners was a frequent occurrence at that time. Only possession of original, correctly registered documents (or the loud, screaming protests of female friends) stood between you and a jail cell. 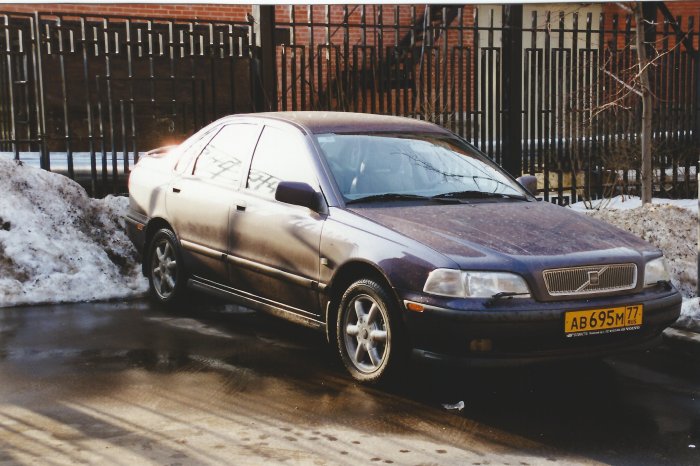 The unfortunate car. Notice the yellow license plate, indicating to the local traffic police the stash of bribe money inside

Turning my attention to the task at hand and selecting the most direct route home, I was soon driving past the Kremlin and the traffic police that swarm around it. I had driven the road a hundred times, but never before had visions of Siberian labor camps haunted the short journey.

Arriving home without incident or arrest, I promptly called my company’s head of security to advise him of the situation. Before I had finished speaking, he interrupted to say, “Don’t worry. They’ll probably call you on Monday and ask for money”.

Sure enough, on Monday morning, when I returned to the office after reporting my stolen passport to the British Embassy, my assistant advised me that someone had called. They had my documents and were ready to negotiate a price for their return.

Beaming with a satisfied, told-you-so pride in his understanding of the Russian criminal mind, the head of security came to my office, made a call, and the deal was struck. The ransom was set at $1,000 and the dark alley in which the exchange would occur was agreed. I would not be attending the party.

Shortly, I headed down to explain the situation to the CEO. In my mind, I rehearsed the conversation and how I would justify the request. I decided to focus on the cost of flying to and staying in another country to obtain a new passport and visa – a cost that would far exceed the ransom demand.

“I’ve had my passport and visa stolen.”

“How much do they want?”

“OK. Go and get the cash from downstairs.” 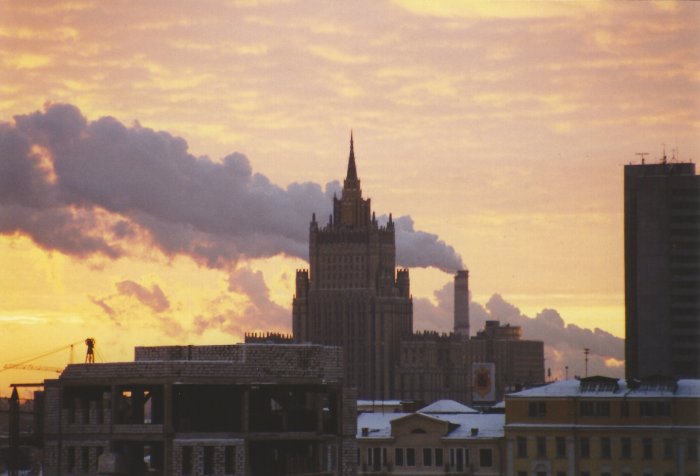 The Ministry of Foreign Affairs building, looking down on myriad dark alleys

When I arrived in the office on Tuesday morning, a collection of familiar documents had been carefully arranged on my desk. Although I asked no further questions, I will admit to making the occasional surreptitious glance toward the head of security as I looked for any evidence of recently inflicted wounds. Thankfully, I saw none.

Today, nearly two decades removed from the incident, I can still vividly recall the events of those four spring days in Moscow. Aside from their simultaneously farcical and disturbing nature, the events made me realize that my familiarity with the city had caused me to become complacent. Its perils had not dimmed, but my respect for them had.

The Pashkov House, from the Bolshoy Kamenniy Bridge

I would leave Moscow at the end of the year, but never again did I underestimate the dangers of that sprawling, energetic, frustrating, intoxicating city.

And never again did I see my sports bag.

Post Script:
I returned to the British Embassy to advise them that my passport had been recovered and was provided with a letter that summarized the circumstances and confirmed the passport’s continuing validity. For six years, the letter dutifully accompanied me on each of my trips back to the UK (of which there must have been at least fifty). Each time, I sauntered undisturbed through passport control. Eventually, I stopped carrying the letter. I’m sure you can see where this is going.

Arriving at Heathrow in 2004, the expected “Welcome Home” was instead replaced by a curt, “Please wait over there”.

“Hello Sir. Our records indicate that this passport has been reported stolen.”

Taking a deep breath, I said, “Yes it was. Let me explain …”