The day did not start well.

Today we would leave Cuzco and, over the next four days, drive the 350 miles or so south to Arequipa, stopping for a couple of nights in Puno, on the shore of Lake Titicaca.

Hoping for the early start that would see us rolling into Puno by late afternoon, we took a taxi to pick up our rental car at the airport – where we were greeted by a curious absence of rental car desks.

With the kind assistance of the staff at the airport information desk, we discovered that the Hertz office was actually located in the middle of Cuzco, not at the airport as stated in our rental confirmation. A brief phone call later and the Hertz representative was on his way to the airport to drive us to his office.

As we pulled into the parking lot behind the Hertz office – no more than a few hundred yards from the hotel we had left ninety minutes earlier – it was apparent that certain members of our party were beginning to exhibit signs of frustration.

The watchmaker’s precision with which the representative then proceeded to inscribe each letter to half a dozen agreements did nothing to alleviate the building tension. Then, when I was finally behind the wheel and we were ready to say farewell to Cuzco, our path was blocked by a protest march. The cause of their protest wasn’t exactly clear from the various chants, but I suspect their complaint was directed at people who walk too quickly.

By now, we were more than two hours behind schedule and the delays and frustration of the morning had only served to intensify the anxiety regarding the journey ahead. 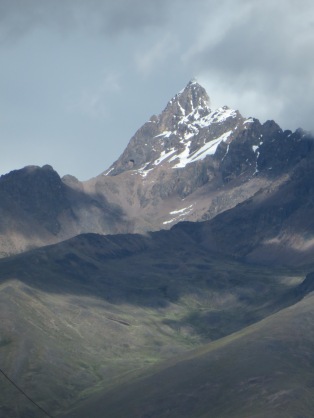 View from the car as we drove from Cuzco to Puno

I’d seen enough of driving in Peru from the passenger seat to more than justify my anxiety. On the previous day, my concern was not helped when we told Alvin (our Machu Picchu guide) of our plans. With a sharp intake of breath and brows raised above suddenly non-blinking eyes, his mood changed instantaneously from jovial to sombre.

With the air of a deathbed pastor, he advised us not to drive in the dark, not to drive in the rain, take oxygen for the high altitude passes, pray – hard – to whichever deity you think most likely to be paying attention and, whatever else you do, get through Juliaca as fast as you can; don’t stop at red lights; run people down if you need to.

Taking route 3, we successfully navigated our way out of Cuzco (I say “we” but I may have been the only person in the car with open eyes) and drove into a world of beautiful distraction.

On the road south we were met by scenery that is simply glorious. Snow-capped mountains soar above as the steadily increasing altitude presents an impossibly distant horizon. We were spellbound.

Approximately 80 miles outside of Cuzco, we stopped for a brief cultural diversion in the small village of Raqchi and the Inca ruins that surround it, which include the remains of the Temple of Viracocha – one of the Inca empire’s holiest shrines. A little further down the road we were welcomed to the local baths of Aguas Calientes de Marangani by a young boy who was intent on selling us a bag of what appeared to be his own, personally produced, hot water. We didn’t stay long.

Remains of the Inca Temple of Viracocha 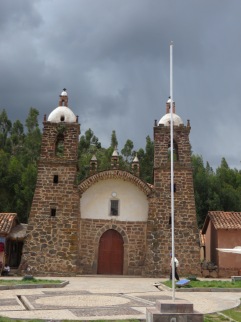 As much as we tried to ignore it, the spectre of Juliaca haunted us with an increasing intensity as we counted down the miles. By this time, we had convinced ourselves that local city rivalry must have caused Cuzco residents to exaggerate the perils of its regional neighbor; it couldn’t possibly be as bad as the stories. I doubt we’ve ever been so wrong.

I’ve driven in over 30 countries, but have never experienced anything quite like Juliaca.

Light was fading by the time we reached the city, which welcomes the visitor with an axle-breaking drop from tarmac to mud swamp; providing the starkest contrast to the well-maintained and mostly empty roads we’d enjoyed for the previous five hours.

With the tarmac goes any sense of driving decorum. Cars, trucks, motorcycles and pedestrians maneuver around each other and cavernous potholes in an “every man for himself” manner. Beyond the mayhem of that introduction, the complete lack of road signs leaves the disoriented visitor with only a shaken sense of direction with which to navigate out of the city. It’s like a traveler’s endurance test.

Main road through Juliaca – really. (Taken during our second, slightly calmer, journey through the city)

As darkness fell, our incredulity at what we were experiencing transitioned into genuine concern for our safety. Alvin’s dire warnings replayed in our heads as a couple of instinctive turns placed us in the middle of narrow, gridlocked streets where swarms of people mingled with the stopped traffic.

Once the traffic cleared and with immense good fortune, we found our directional guesses had somehow placed us on the correct road. Validated by our daughter’s GPS skills, we were eventually heading out of Juliaca towards Puno. Our collective relief was palpable.

Then – and to add a final insult to the Juliaca injury – the rain started. 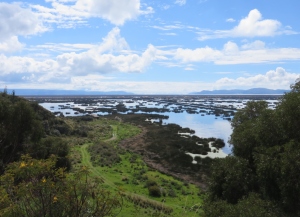 It had reached torrential proportions as we arrived in Puno, but we were at least comforted by the knowledge that tomorrow would be a quiet day.

Unfortunately, the planned relaxation by the shores of Lake Titicaca didn’t exactly go to plan. While it certainly included a lot of lying around, it was a state not voluntarily achieved. The 4am dash to the bathroom was the first of many similar interruptions to 24 hours spent groaning in a hotel bed.

My wife, Sarah, and our daughter spent the morning strolling around the vicinity of the hotel and on the shore of the lake, enjoying the company of the guinea pigs and alpaca that populate the area. But such wanderings can only fill so much of a day.

Who you lookin’ at?

While initially sympathetic to my plight, as evening rolled around, my wife’s patience had run out and it was time to have some fun.

Finding out that I didn’t, in fact, have altitude sickness

Convincing me that I must be suffering from altitude sickness, she asked the front desk to bring an oxygen tank to the room. As I donned the mask and photos were taken, thoughts of witty facebook captions were clearly running through her head. I began to suspect that, if I were to be ill for another day, colonoscopy and dental surgery would top the list of her possible amusements.

I recovered just in time.

To get to Arequipa we had no choice but to go back through Juliaca. Although we were now acquainted with its hazards, familiarity did not make our passage through the city any more enjoyable, although daylight did at least seem to lessen the feeling of trepidation. There was even some laughter – albeit of a slightly frantic variety – as our car was once again bounced around by the alleged road. 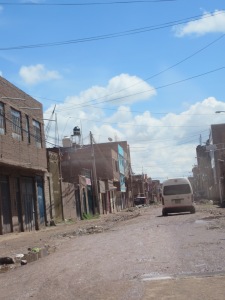 One of Juliaca’s inviting streets

A final word of caution about Juliaca. However quickly you feel the need to get out of the city, don’t leave until you’ve filled up with petrol. Beyond Juliaca, distances are vast between the small outcrops of civilization that dot the landscape, and few of those dots are able to assist a driver with an empty tank.

An essential stop on the road to Arequipa is Cañón del Colca. Leaving the main road, a long road traverses a comparatively dull landscape before a seemingly never-ending series of switchbacks cascade down the side of the mountain towards Chivay, the town at the head of the canyon. 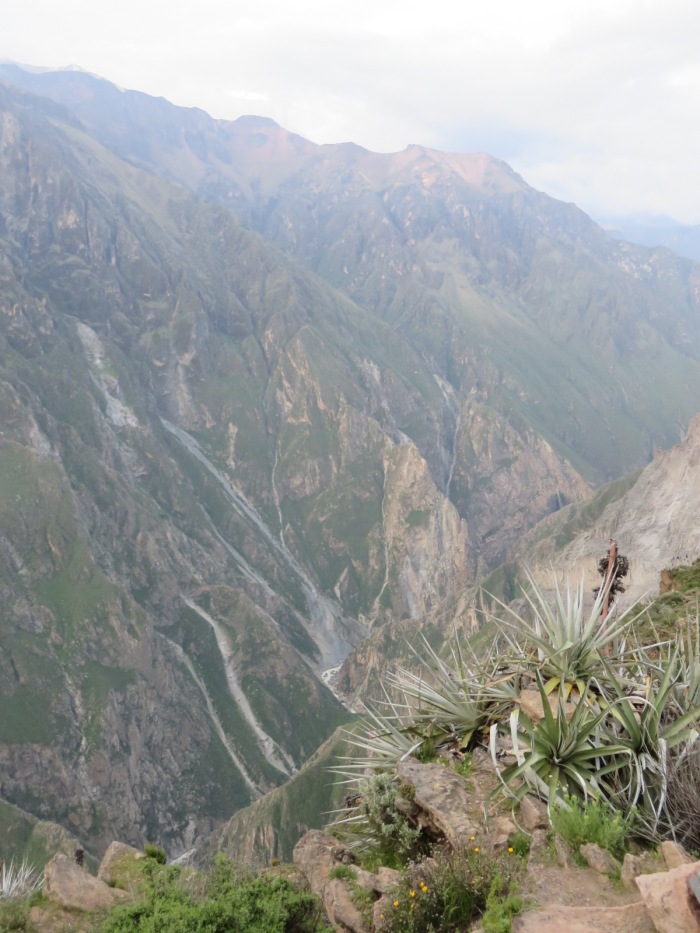 With a maximum depth of over 9,000 feet (the Grand Canyon is less than half as deep), Cañón del Colca is simply breathtaking. As you peer carefully down from a not-too-close-to-the-edge vantage point, you sense every inch of the distance between you and the Rio Colca, which races along the canyon floor a mile or two below your feet.

A few companions along the Cañón del Colca road

The stunning views also help to take your mind off the mostly unpaved and rutted road, frequently crossed by water gushing down from the mountains high above, which transports you on a bone-shaking journey along the canyon’s edge. Unless you have a day or two to spare, it is also a road that you have to take in the opposite direction in order to get back to civilization and the road to Arequipa.

Arequipa is a wonderful city. Although occasionally dismissed, the “Ciudad Blanca” is much more than a gateway to canyon country or an acclimatization stop en route to higher altitudes.

Gleaming white stone buildings surround the city’s central plaza and line roads and narrow passages that simply beg to be explored. Add the picture postcard backdrop provided by the magnificent El Misto volcano (19,101 feet), and you really couldn’t blame the Arequipeños if they feel a little smug; they have a lot to be smug about.

I suspect most visitors to Arequipa, however long their visit, wish they could have stayed a while longer. We were no exception – but it was time to go home.

We had packed a lot of Peru – perhaps a little too much to fully absorb – into a short trip. Sprawling cities and desolate wilderness, iconic sites and unmitigated chaos competed for attention; our emotions had run the spectrum from sheer wonder to penetrating fear.

There is a map of the world in the basement of our house.

As we placed our first pins into the South American continent, each of the memories and emotions from our trip to Peru came flooding back. They will be the first of many.

6 thoughts on “A few more days in Peru”